Studies reveal one in every ten people lacks access to clean water. The challenges we have to face because of the water crisis are substantial. The leading cause of concern is that this water shortage problem is worsening daily and expanding worldwide.

Climate change has been contributing to the rising threat of water scarcity. Governments worldwide are actively trying to collaborate with international organizations to combat the aftereffects of natural disasters. What is Global Water Crisis?

According to the United Nations, around 2.1 billion people around the globe don’t have access to clean water. This global water crisis is contributing to problems throughout the world. Lack of water leads to poor sanitization practices and several health diseases.

According to professionals, the situation will keep worsening because of climate change. This situation will lead to conflicts between water scarce countries over water. Without water, no country will be able to progress, and we must address this issue.

Solar power is an additional renewable resource that can help solve this issue. Solar panels will assist in lowering carbon emissions as they run on sunlight. They will also help preserve water resources.

Fortunately, many private firms have switched their power consumption to solar energy, which has reduced carbon emissions to record levels. Still, for further development, countries should try finding new solutions and move towards renewable resources to stop the world from experiencing global catastrophe.

One cannot emphasize enough the importance of water as it’s the reason for having life on Earth. Our lives are tremendously dependent on water. It is employed in cleaning, cooking, irrigation, drinking, and other activities. Water is crucial for sustaining good health since it aids digestion, regulates body temperature, and flushes toxins from the body. 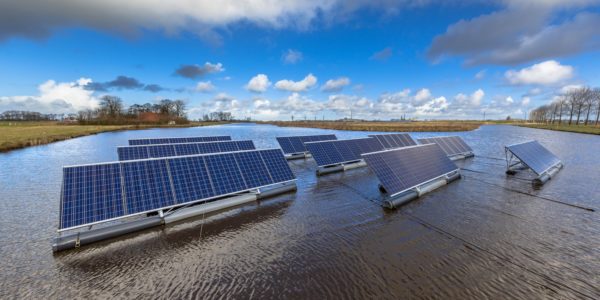 Around 450 million children live in an area where they don’t have enough clean water to drink and for their everyday needs. Besides, when natural disasters hit areas struggling with a lack of water, they destroy all the water supplies. All the freshwater resources get contaminated, making them unsafe to drink.

Climate change is one of the main contributors to the water shortage. The areas most vulnerable to the effects of climate change already experience water shortages. Water supplies are also lost due to prolonged drought or more intense monsoons. On the other hand, freshwater resources become salinized and unusable because of rising sea levels.

Hydropower, often known as hydro energy, is renewable energy that uses water from resources like dams and rivers to power hydropower plants. The turbine rotates due to falling water causing the generator to convert the mechanical energy of the spinning turbine into electrical energy. Hydroelectric power helps generate a considerable portion of the world’s electricity. Currently, 31.5% of the renewable electricity in the United States is produced from hydropower. Since water efficiency and conservation are essential elements of sustainable water management, it is crucial to focus on developing ways to store water. Smart irrigation systems and solar desalination are excellent examples of clean technology for managing and conserving water.

Because of increasing pollution, water resources are getting contaminated, making it hazardous to drink. Therefore, it’s crucial to address pollution and measure and monitor water quality. It is essential to upgrade the sewage systems in selected locations.

Another effective water-saving method is moving towards renewable energies like solar energy and wind energy. Solar power will help preserve water resources, while protecting the environment from carbon footprint.

Role of Solar Energy In Dealing With the Global Water Crisis

Solar panels don’t require water for cooling or turning the turbine to produce electricity. According to a report released in January 2015 by the International Renewable Energy Agency (IRENA), the amount of water required to produce one unit of electricity using solar panels can be as little as 1/200th of what is required by a typical power plant.

Solar panel manufacturing uses some water, much like any other industrial operation. However, efficient and recycling industrial manufacturing techniques can reduce the water footprint and adverse environmental effects.

The River Network, a group dedicated to water conservation, compares the water use of various energy sources throughout their lifetimes. The investigation shows that wind and solar panel technologies consume minor water.

Solar panels use less water than those traditional methods. Solar panels need no water after installation. They can work without water during their whole lifespan, around 35 years. Using fossils as a source of energy requires a lot of drilling. Companies need to drill grounds to extract gas and oil. In the process, they dig deep into the surface through the high-pressure liquid to extract fuels. This high-pressure liquid drill is completed mainly by utilizing water, which is why it’s also called hydraulic fracturing.

This process wastes considerable water because it needs fracking until the fuel is found. After that, further water is wasted in refining and transportation.

According to a study, energy companies waste around 250 million gallons of water in just one year. Wastage of water in energy projects in such a significant amount is going to cost the environment. Solar power is the best alternative to fossil fuel and hydropower.

Floating solar farms are another innovative way to conserve water. Solar farms are where many solar panels are set up to collect energy from the sun. These solar panels produce power using photovoltaic cells and other solar energy harvesting techniques.

Authorities use solar photovoltaic (PV) panels to cover water bodies, conserving water. This has numerous advantages for both water conservation and the distribution of electricity.

Solar panels take in the rays to convert them into electricity, preventing the evaporation of water bodies. Placing solar PV panels over water ponds using floating solar systems also improves the energy yield of the PV systems through the cooling effect. Another advantage of placing solar PV systems over these ponds is that less land will be needed and can be used for other purposes.

As a result of the ongoing rise in sea levels, the freshwater sources used by millions of people are becoming more and more saline. Water stress is only getting worse due to rapid climatic changes.

More than 700 children die daily from unclean water, poor sanitation, and inadequate water sources. Water is the most important resource on Earth currently. We collectively must address the issue and take suitable steps to eliminate the shortage. Solar power is currently the most effective and practical solution.

Although the concept has been around for centuries, solar power’s importance has increased dramatically during the last two to three decades. If you also want to play your part in preserving water and helping the world deal with the crisis, switch to solar energy today for your commercial electrical needs. Get in touch with Coldwell Solar for more information, tips, and guidance regarding commercial solar systems.

How Commercial Solar Energy Savings Will Help Your Business